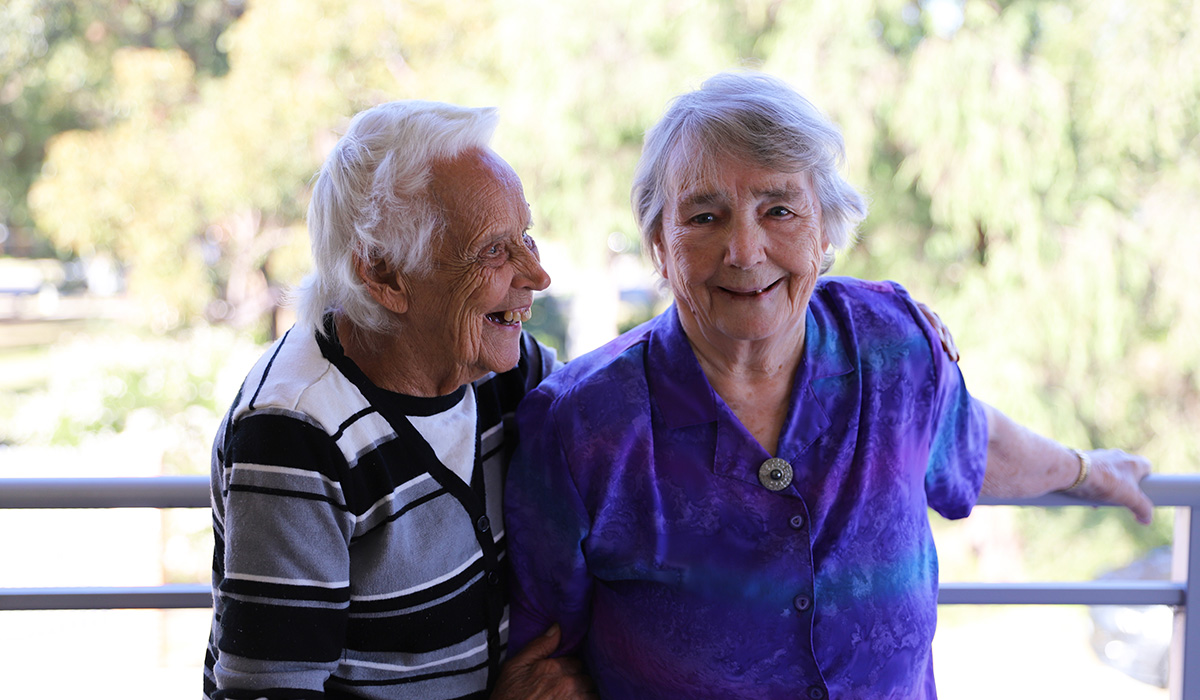 For a decades-long story of friends and family, look no further than octogenarians Esther Friend and Janet Johnston, who have been friends since their teens and whose eldest children fell in love and got married.

Esther’s and Janet met in 1949 through a church group in Glasgow, Scotland, and now live just three doors down from each other at Baptistcare Gracewood Residential Care in Salter Point.

They are lifelong friends who share two grandsons and five great-grandchildren, and although there were times when they were living on opposite sides of the world their friendship has endured for 70 years.

“When we’re together we just pick up where we left off,” Janet said.

Esther’s eldest son, Philip, is married to Janet’s eldest daughter, Ruth, and says it’s wonderful that both mums are living at Baptistcare and can continue their friendship so easily.

“They talk a lot and have been on quite a few of the trips organised by Baptistcare together,” he said.

As well as sharing a passion for the church, Esther and Janet also share happy memories of family holidays, weddings, birthdays and anniversaries, new arrivals and milestone moments in the lives of their children, grandchildren and great-grandchildren.

They both got married in 1955 and attended each other’s wedding. They were widowed within five years of each other. Janet after 63 years of marriage and Esther after 58 years.

Janet was the first to experience Perth, arriving on Australia Day 1968 with her late husband John, a Baptist Minister, and their three daughters. On a return visit to Glasgow almost 10 years later, romance blossomed between Ruth and Philip.

When Esther visited Perth for the first time it was in 1978 to attend Ruth and Philip’s wedding. After enjoying the sunshine she vowed to make WA her home one day, returning in 1986 with her late husband Alex, a Salvation Army Officer, and their youngest son.

Esther describes Janet as a good friend who “knows a lot of things”.

The friends made the move to Baptistcare Gracewood this year, arriving within nine weeks of each other.

Janet says they see each other every day.

“We thank God for 70 years of our wonderful friendship,” she said.

When 5-year-old Mia Rodriguez heard Baptistcare Gracehaven Residential Care in Rockingham could no longer have visitors due to COVID-19 protection measures, her heart went out to the residents.

Serving up happiness in a cone at Baptistcare Gracehaven

What is the difference between CHSP and HCP?