Devoted couple still do life together while living apart

Devoted couple still do life together while living apart 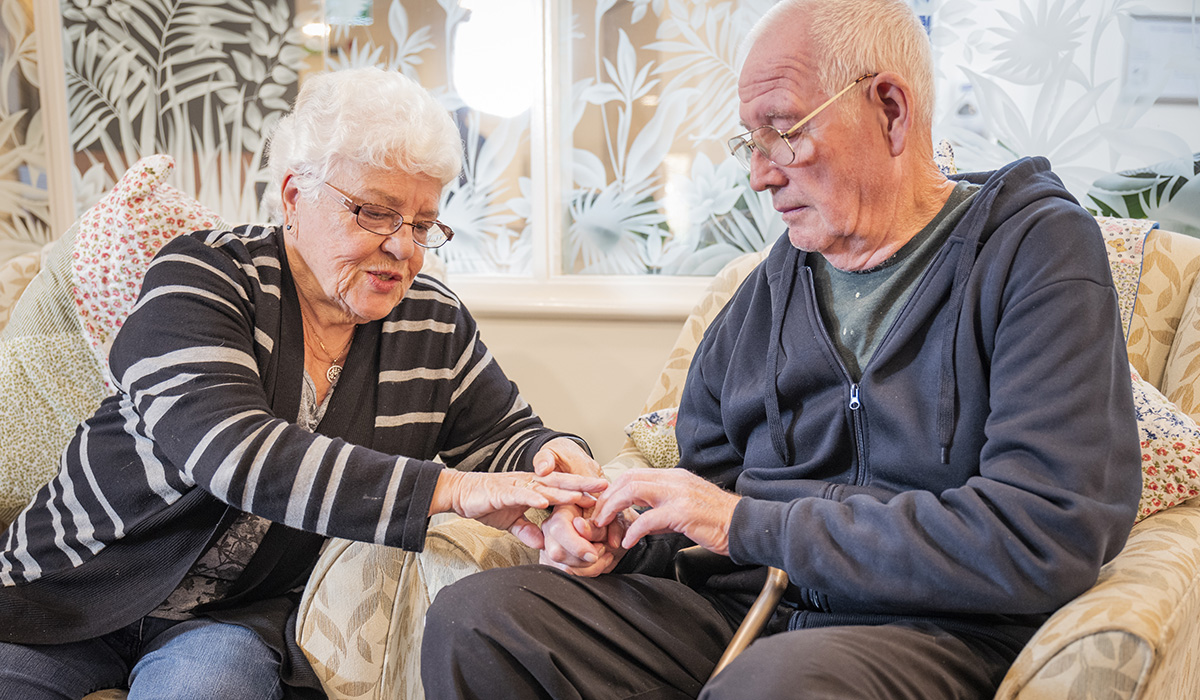 Andy and Barb Cannon have always “done life together”, even though Parkinson’s disease now means they no longer live together.

Mr Cannon was diagnosed with Parkinson’s 15 years ago and moved into residential care in May 2017 when it was no longer feasible for him to be cared for at home. But the separation hasn’t stopped the devoted couple, who have been married for 57 years, from spending lots of quality time together.

Mrs Cannon visits her husband almost every day at Bapistcare Gracehaven Residential Care in Rockingham and they also chat daily on the phone.

“We’ve always done life together,” Mrs Cannon said. “Andy moving into residential care was hard, but we know it was the best thing.”

The couple enjoy time together, Mr Cannon joins in activities at Baptistcare Gracehaven and Mrs Cannon keeps up with her own friends and interests.

The couple’s three children, seven grandchildren and four great-grandchildren all visit Mr Cannon regularly, and there are often family barbecues in the park opposite Baptistcare Gracehaven.

Mrs Cannon said having the park on the doorstep was a big bonus as there was lots for the little ones to do and they could spend time with their great-granddad outside of the residential care environment.

“We like Baptistcare Gracehaven because it has a country feel and we’re country bumpkins at heart. Andy loves having the big park opposite and all the open space. And it’s only a five-minute drive away for me,” she said.

Mr and Mrs Cannon moved to Perth at Christmas in 1974, from Essex in the UK.

“We arrived with three kids aged seven, nine and 12, five suitcases and nowhere to go. We never looked back!” Mrs Cannon said.

Mr Cannon, a blacksmith and panel beater started a vintage car restoration business and by 1996 the family had moved to a 17-acre property in Jarrahdale.

But when Mr Cannon was diagnosed with Parkinson’s eight years later the couple bought forward their retirement plans. They sold their Jarrahdale home for something more manageable in Safety Bay and set off to explore the world.

Already keen hot air balloonists, they went in search of more travel adventures, ticking off bucket list trips to Hawaii, San Francisco and the Caribbean, through the Panama Canal and on to England to visit family. They also bought a motor home and travelled around Australia.

But two years ago, life took another turn when Mr Cannon’s health deteriorated rapidly, resulting in three months in hospital and a month in respite care before moving into Baptistcare Gracehaven.

“By that time Andy couldn’t walk at all and was in a wheelchair,” Mrs Cannon said.

Thanks to specialists at the Perron Institute for Neurological and Translational Science in Nedlands, Mr Cannon’s mobility has since improved dramatically and he now gets around using only a walking stick.

“We’ve had a wonderful life. Sometimes when I show Andy photos from our bucket list trips he gets upset and says ‘it’s my fault we can’t do that anymore’,” Mrs Cannon said. “But I say ‘No, we’ve done it! We’re not others who keep saying they’re going to do it, we actually did it!’

“We’ve done so much with our life and have been really, really lucky,” Mrs Cannon said.

Baptistcare is proud to present 'Demystifying Aged Care', a podcast which shines a light on the ageing journey.

Bowled over by Baptistcare Riverside

Rediscovering the joy of photography